When I heard that a new project called "WILDSIDE YOHJI YAMAMOTO" would be launched, I had a feeling that deeply resonated with me.

The wild side - in other words, the "wild way.” In the English-Japanese dictionary, the word "wild" is translated as "rugged, wild, uncivilized,” but the first definition that appears in the Cambridge Dictionary is "uncontrolled." A state of being uncontrolled (by human reason). It can therefore be used to describe the state of a wild, untouched land, or it can mean a state of madness in which human reason has lost its hold. "Wild ain't it?" was the popular cliché of a comedian showing off his muscles a few years ago and was supposedly intended to show off the fact that he was a man with a somewhat dangerous smell. The "wild side" is essentially "the one that smells dangerous."

The announcement of the “WILDSIDE YOHJI YAMAMOTO” project states;

"This is a concept project that proposes an edgy worldview unique to Yohji Yamamoto that has never been seen before, in collaboration with various brands and artists, focusing on fashion, art, and lifestyle. We will release a series of special items in a wide range of genres, without being limited to any specific category.

In this project, Yohji Yamamoto will actively collaborate with other brands and people in a wide range of lifestyle fields, including not only fashion but also art, to develop items, products, and artwork. The "wild" nature of Yohji Yamamoto does not mean that Yohji Yamamoto is (obviously) out of control. It is a polyphonic project that actively invites other companies and people through " collaboration".

While a single voice (monophonic melody = music = language = thought) from the viewpoint of a single "Yohji Yamamoto" still exists, and strictly so, this is a project to create a polyphonic world of music, language, and thought by having the voices of others join in. The boundaries of "Yohji Yamamoto" will be expanded, and in the style of Bakhtin, who discussed Dostoevsky, the items, works, and products produced by this project must bear fruit in a multi-perspective expression like the Dostoevskyian novel world created by characters with equal rights which each have their own ideas. The items, works, and products produced by this project are bound to be extraordinary. It is hard not to be excited by the prospect of something so special.

And one more thing.

I would also like to mention that this "wildness" has another meaning as well and that there is a hint of something unusual about it.

The word "wild side" tends to remind me of Lou Reed's 1972 song "Walk on the Wild Side," and I am not sure how conscious Mr. Yohji himself was of this, but I believe that he was not completely unaware.

Lou Reed's sings about the "dangerous road" and "messed up road" that the "wild" side, including transgendered people who depended on Andy Warhol's studio, "The Factory," walked/walked from the 1960s to the early 1970s. The inspiration for Reed's song was "A Walk on the Wild Side," published in 1956 by Nelson Algren, and the "Poet Of The Slums" (the novel was made into a film by Edward Dmytryk in 1961).

Although we should refrain from going into detail about this novel, which traces the physical and spiritual wanderings of a young man in rural Texas during the Depression that began in 1929, I would like to share with you a quote from the author, Algren, in the Macmillan Publishers edition of "The Great Depression.

These words from The Poet Of The Slums remind me of something Yohji said when I interviewed him once in reference to Ango Sakaguchi's autobiographical novel, "Wind, Light, and Twenty Year Old Me." In describing this essay, which Ango wrote about his year as a substitute elementary school teacher when he was just 20 years old, Yohji said, "What struck was that when I became an elementary school teacher, I realized that children who do bad things have sad reasons for doing so. That is why I never scolded bad children" (GQ JAPAN, October 2018).

In this polyphonic world where there are children who have mistaken their ways and become more worthy of the human name, who believe in the good of humanity and have sad reasons to hurt and suffer and do bad things, there is not only a "sunny side" but a "wild side" as well. And the Wild Side may actually be a good thing. 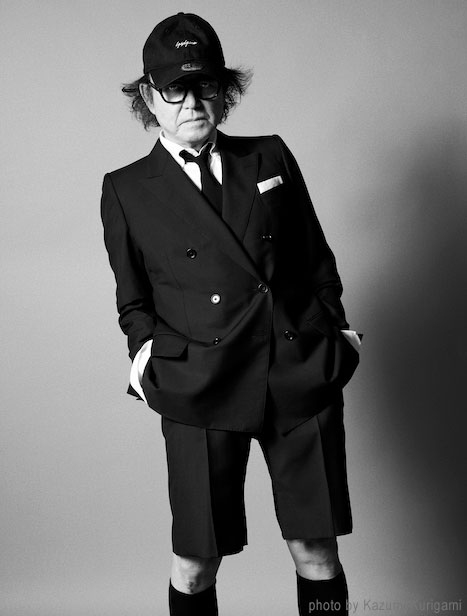 Masafumi Suzuki
Born in Tokyo in 1949. Editor-in-chief of "GQ JAPAN" from January 2012 to December 2021, editor-in-chief of "ENGINE" from August 2000 to August 2011, and editor-in-chief of "NAVI" from 1989 to 1999. He is a graduate of Keio University, Faculty of Letters. After working as a reporter for an English-language newspaper in the shipping and shipbuilding industry, he participated in the launch of NAVI in 1984. He is the author of " ○✕ (Marukusu)" (Nigensha), "Run! Yokoguruma" (Shogakukan Bunko), and "Suzuki-san's Life and Opinions" (Shinchosha), among others.