――Navigated by Motofumi "POGGY" Kogi, we have a cross talk with Keizo Shimizu of NEEDLES, whose worked on collaboration clothes, and Masako Noguchi and Takuma Sasaki of NOMA t.d.

POGGY: This time, I decided to create clothes for WILDSIDE with a variety of brands. I thought it would be interesting for WILDSIDE to have a mix of different cultures from the YOHJI YAMAMOTO worldview, so I asked NEEDLES and NOMA t.d. to collaborate with us, and they gladly agreed to. Thank you very much for that. When we talked to Mr. Shimizu about this project, you mentioned that you used to wear YOHJI YAMAMOTO suits in the past, right?

Shimizu: Yes, I did. It was right after I started "NEPENTHES," so I think it was at "Barneys New York" in the late 80s or early 90s. It was a YOHJI YAMAMOTO suit, so it was a suit but not too formal, with a shawl collar jacket and pants that were quite thick. At the time, I was in my thirties or somewhere around there, and my hair was long and tied up, so I remember thinking that the suit looked great on me.

POGGY: I see. I was very impressed by the story you told us about you and ENGINEERED GARMENTS designer, Daiki Suzuki buying Reebok aerobic sneakers when you were working at "REDWOOD" (*a long-established select store in Shibuya that mainly sells American items).

Shimizu: When the "REDWOOD" store was located on Fire Street in the mid-80s, it was around the time when aerobics was becoming popular among the public. There was a sporting goods trade fair in Harumi, and I had a mannequin there wearing Reebok sneakers. I heard that a company in Sendagaya was importing the sneakers, so I contacted them to get them. But when I stocked them, I was criticized by Daiki, who said, "These won't sell!" (laughs) We fought and didn't speak for about a week, but one day I came back from my lunch break and saw Daiki wearing the shoes. I asked him why he was wearing them and he told me that Mr.Yohji himself had just come into the store and bought a pair of black Reebok high-cut Aerobic sneakers and a pair of pitch-black Pecos boots by Endicott Johnson, a brand which makes safety shoes in the suburbs of New York City. Since Daiki also liked the DC brand, he liked them and was like, "Reebok is so awesome!!"

POGGY: Those were the sneakers with the velcro on top, right?

Shimizu: Yes, the "Ex-O-Fit" LOW and HI cuts. They were worn in the music video for the song "Dancing in the Street" by Mick Jagger and David Bowie, which made their popularity explode.

POGGY: I see! The name of this project, WILDSIDE, was inspired by the name of a song by Lou Reed, with whom Mr. Yohji had a relations with. Did you also listen to the song back then?

Shimizu: Of course. I still like it, and it gives me image of the New York underground scene, including Andy Warhol. 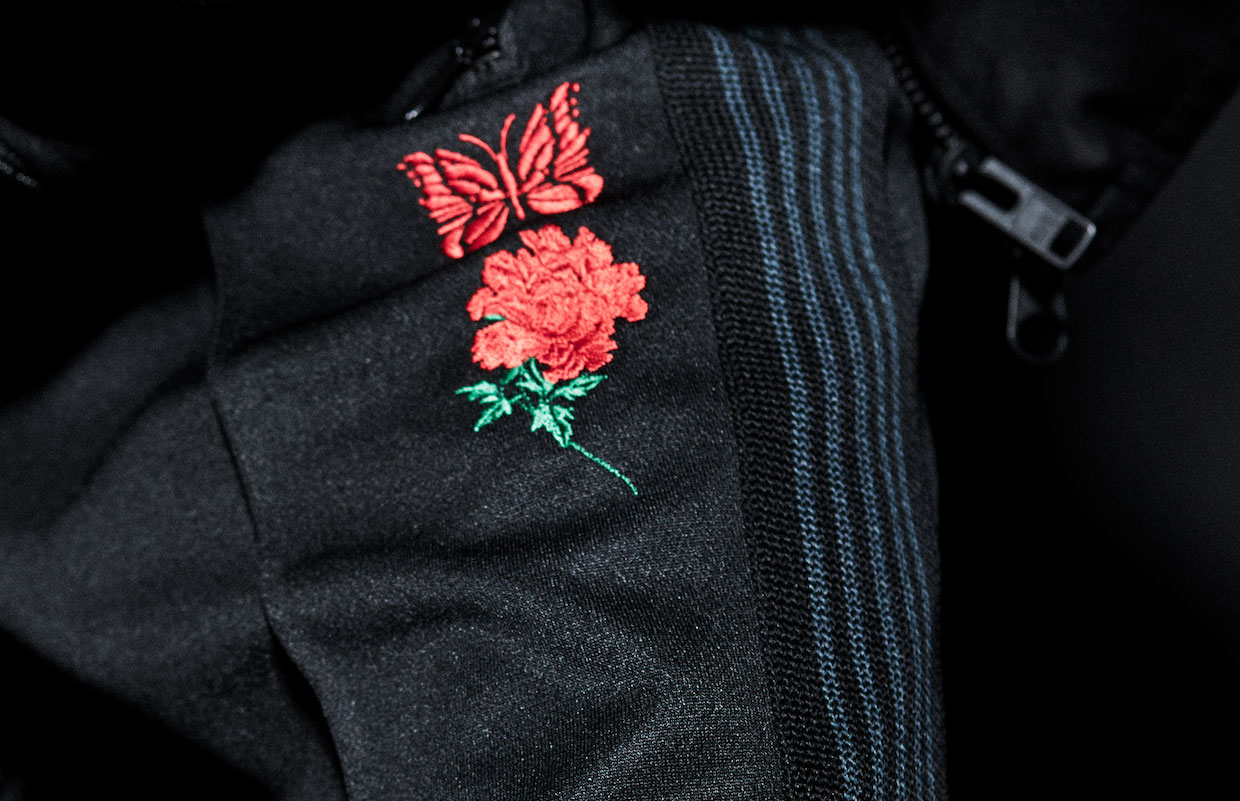 WILDSIDE x NEEDLES track pants with NEEDLES icon butterflies and "flowers and boys" peony embroidery. The embroidery is used at the suggestion of POGGY and a symbol of this collaboration with WILDSIDE.

POGGY: I hadn’t heard much of it at the time, but I learned about it when A TRIBE CALLED QUEST sampled Lou Reed's song. I think that because it is a great song, it was sampled and passed down to a different generation. In that sense, the motif of the flower "peony" that Mr. Yohji used in his "Flowers and Boys" collection at that time might make it a little strange to call sampling, but I thought it would be interesting to convey the theme of "black" and "peony" as an icon through the clothes of NEEDLES and NOMA t.d. in the current era. I also really like NOMA t.d.'s hand-embroidered shirts, but what did you think of the theme of "peony" this time, Mr. Sasaki and Ms. Noguchi?

Sasaki: For our generation, I had the impression that peonies were very popular when they were used in YOHJI YAMAMOTO's collection, so I thought it was a good motif. I felt it was an easy challenge for us to take on.

Sasaki: All my friends around me were wearing them. I didn't really go for them, but I bought some tae kwon do shoes thinking that I could pull them off.

POGGY: Tae kwon do shoes are coming around again now. I don't know yet, but I am selfishly thinking that it would be interesting if we could get Mr. Noguchi to draw peonies as the next step of WILDSIDE (laughs).

Noguchi: Thank you. The hand-embroidery of peonies that I was able to create this time inevitably blurs the details, but I think that is the beauty of hand-embroidery, so I think that in that sense, it is more like NOMA t.d. than the motifs used by YOHJI YAMAMOTO back then.

POGGY: Nice. NOMA t.d. You don't usually make a lot of black clothes, do you?

Noguchi: I've actually been gradually starting to make some these days (laughs).

Sasaki: It was interesting to receive the theme "black" for this project during such a time.

Noguchi: We have started to wear black ourselves. I used to be a little resistant to black, but I feel like I have rediscovered its good qualities.

POGGY: I see. For this project, I am placing importance on not only the color black, but also on red and purple, which are uniquely Japanese colors. You use purple often, don't you, Mr. Shimizu?

Shimizu: Purple is our color (laughs). If I recall, I have loved purple and black since I was a child. I used to think it was beautiful when I saw purple used for rugs in movie theaters or at temples when I went to Buddhist memorial services.

POGGY: In this collaboration, you also used red as a subtle color, which gives us a slightly different feel from the usual. Both NEEDLES and NOMA t.d. have a sense of sexiness, but you are also conscious of sexiness in casual wear, aren't you?

Shimizu: For NEEDLES, I am aware of that. 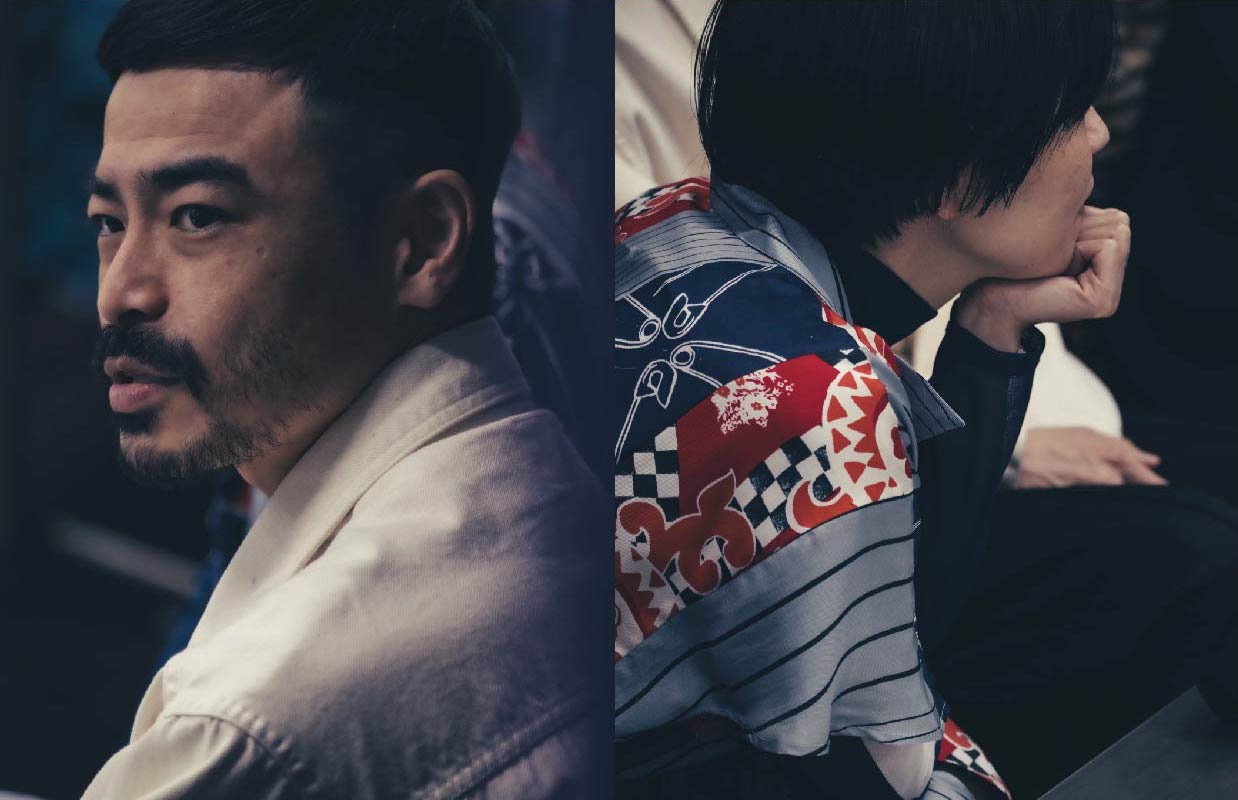 POGGY: The black denim material for this blouson that NOMA t.d. made for us this time was a new material that you introduced this time around, wasn't it?

Noguchi: Yes, it is a fabric that we have never used in our inline before.

POGGY: Both the fabric and the embroidery are cotton, so the way the texture will develop a nice taste as the item is worn is something I think are great. But the charm of basic items is that they change depending on who wears them, don't they?

Noguchi: Exactly, and that is what we want to put forth at NOMA t.d. I have a different feeling about women's wear though. I told a women's buyer in England that I think it is interesting that basic clothes change with style, and I think that it is possible because Japanese fashion deviation is high, but it seems that some stores overseas still require women's clothes. 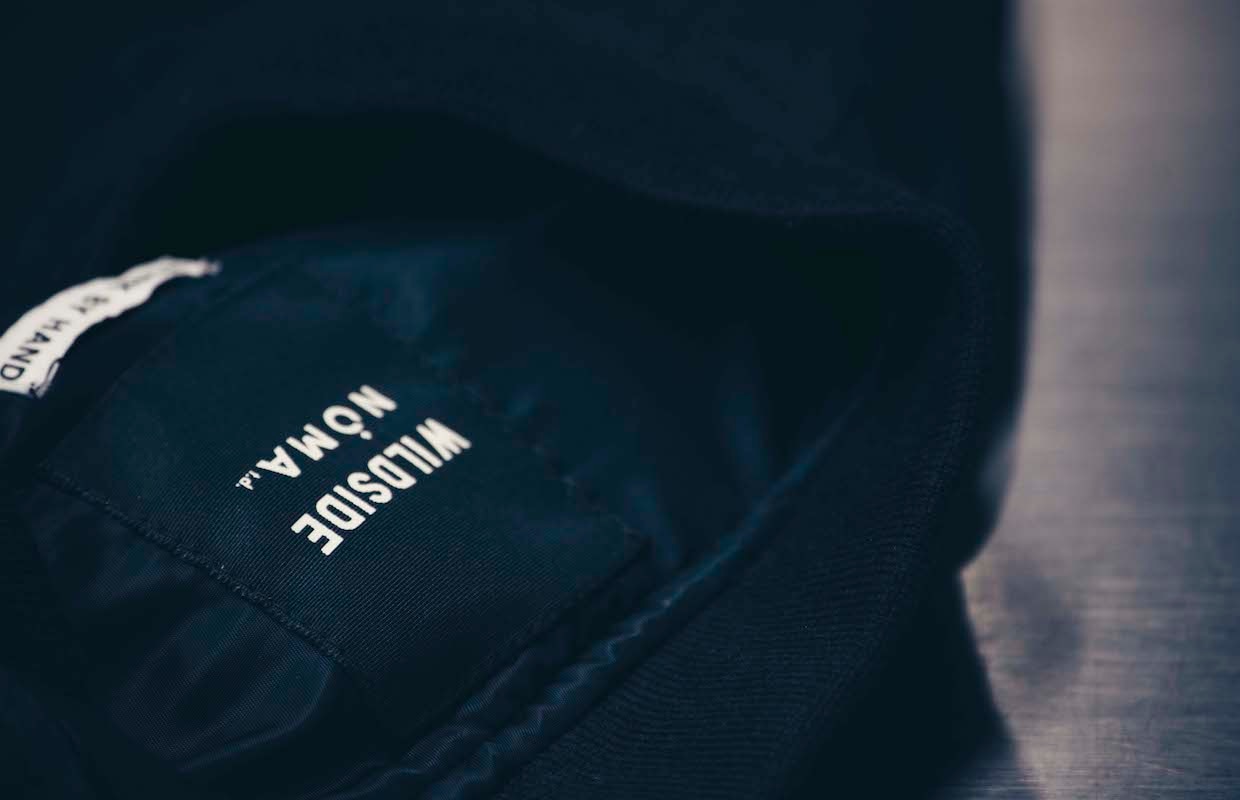 Tags to be attached to clothing produced by NOMA t.d. in collaboration with WILDSIDE. Jackets and shirts will be hand-embroidered with peonies.

Shimizu: I think the longer we work on it, the better it will get.

――Thanks to all of you, we were able to create this gorgeous and unexpected collaboration, and I look forward to its release. Thank you very much for your time today. 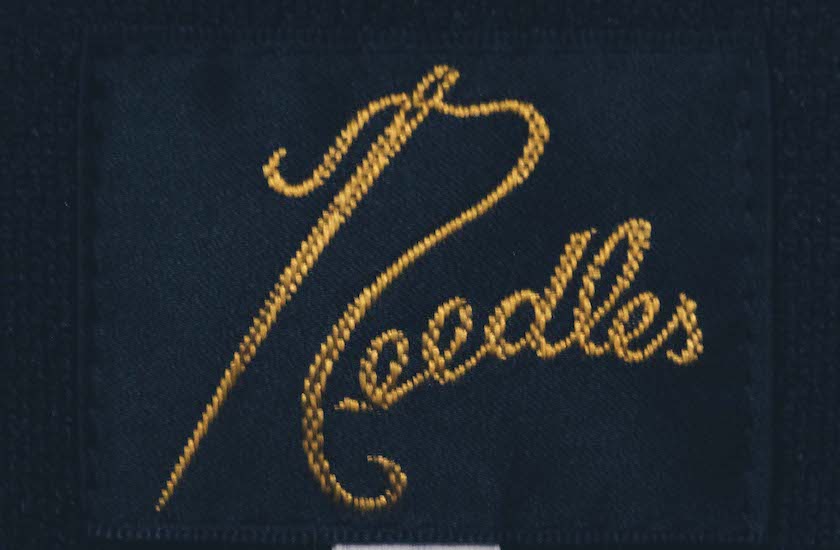 Profiles
Keizo Shimizu
Representative of the select store "NEPENTHES" in Shibuya and designer of "NEEDLES". Keizo launched "NEEDLES" in 1995 as a brand that creates collections from a personal perspective that projected his own world view, based on his experience of visiting countries around the world for over 30 years and producing a variety of products for the world. 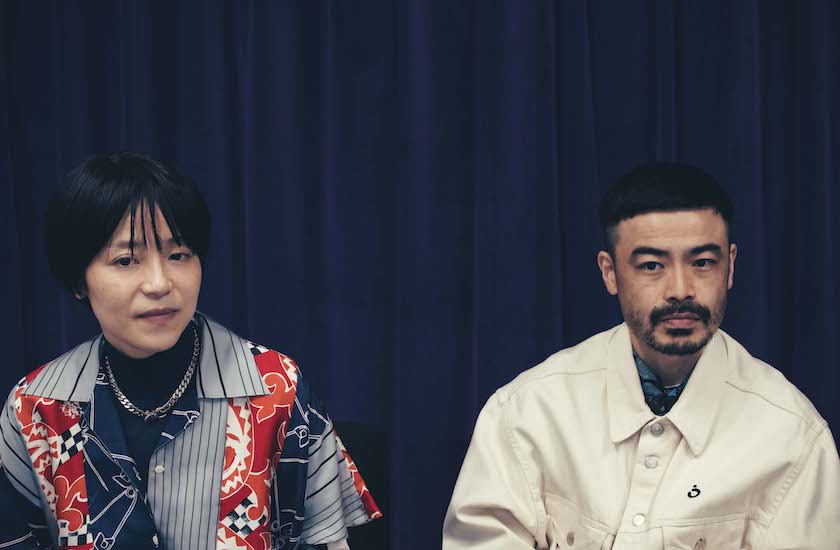 Profiles
Masako Noguchi / Takuma Sasaki
Masako Noguchi, a textile designer, and Takuma Sasaki, a select store director and buyer, started the brand "NOMA t.d." in 2005 as a designer duo. The duo has developed a contemporary collection of unique textiles that utilize hand-drawing and a new perspective on traditional techniques. 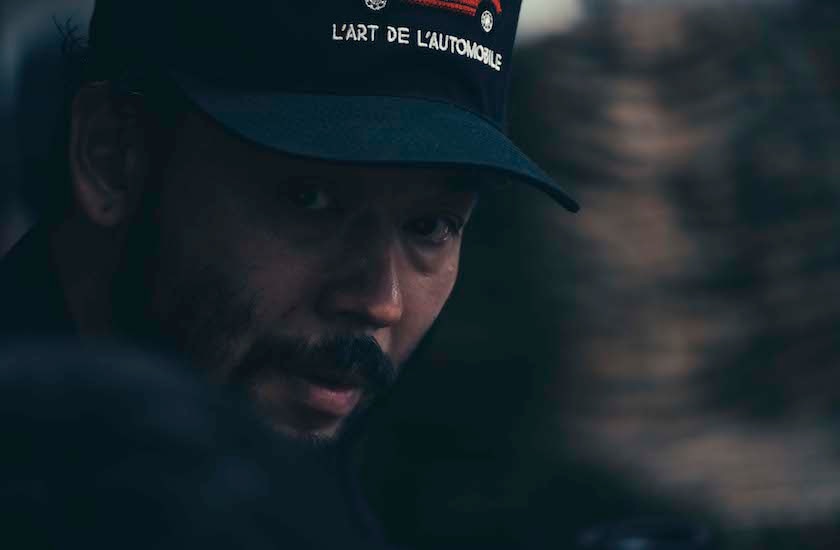